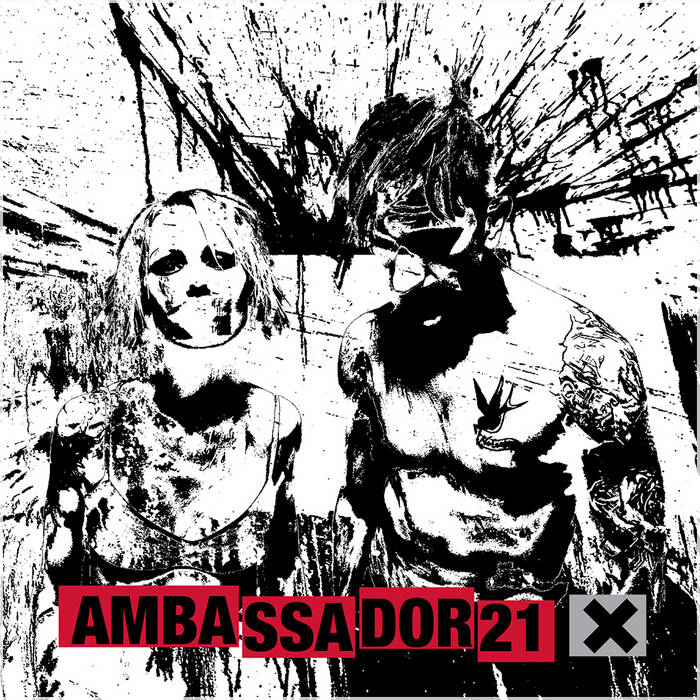 HANDS welcomes a catchpenny addition to its band roster: Ambassador21, the Belarusian duo who have brought their digital hardcore sound to electronic and industrial festivals worldwide and look back at a plethora of releases since the turn of the century. “X” is meant to tie up loose ends, with nine unreleased and seven compilation tracks from the period of 2005-2012 showcasing their arsenal of sound: Hard electronics, samples, heavy guitars and Natasha’s sandpaper vocals are the ingredients of this sonic Molotov cocktail!
Ambassador21 are surely active activists, and their efforts have put them in the upper tiers of the digital hardcore scene. Highly political, cultural renegades, they are quite a memorable display on stage, energetic and charged. Such is also their music, and the 16 tracks on “X” bear witness to that.
Some tracks have previously had a wider public exposition on prolific festival compilations, like the abrasive electro punk opener “Dope Off” (Kinetik 2010), the ultra-noisy “Elvis vs. Batman” (Maschinenfest 2005) or the midtempo-rhythmic “Unhappy Day” (Elektroanschlag 2006). Others have been hidden in more obscurity so far – “Beat.By.Beat” for example is a thumping piece of electro thrash which has now found its way from Bandcamp onto a physical release.
But it’s the exclusive tracks that put the icing on this cake of course, and there’s plenty to discover: “Zensyou66” is nightmarish and obsessed, “X-Rage” turns out a grinding hardcore/speedcore killer, “Operation Touch Gun” features Hypnoskull – and a well-known track in a so far unheard rework. The live edits of “Make It Loud” and “Power Rage Riot Death” up the ante noise-wise, while “Face Your Future Killers” (recorded live nowhere else but at HR Giger Museum!) shows the “band” sound of Ambassador21.
Clocking in at well over 70 minutes, “X” is one for the fans as well as for those who wish to discover the force that is Ambassador21: A creative outlet for rage and aggression, and the desire for change, heartfelt, loud and proud!
Fuck All Systems!