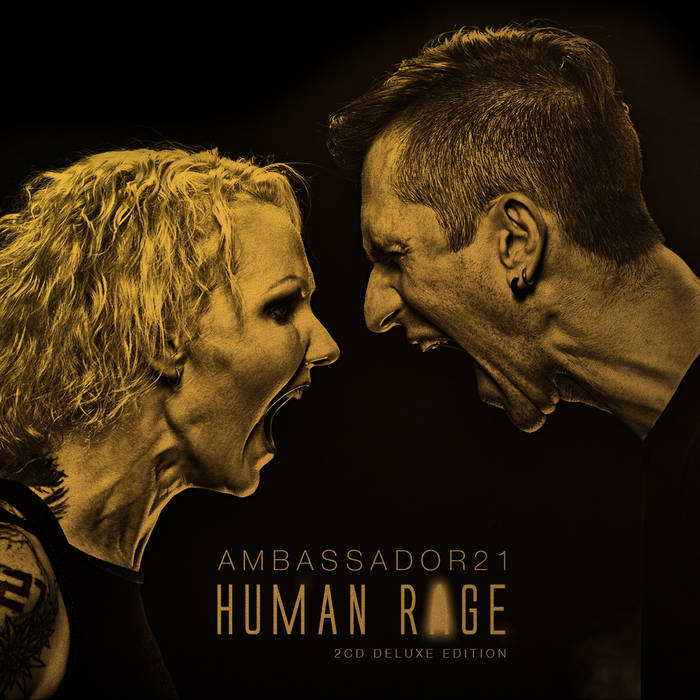 
After 6 years full of blood, sweat and tears, AMBASSADOR21 strikes back with new mind-blowing studio album.
AMBASSADOR21 always balance on the edge, their music is a breaking point, where industrial, hardcore, rhythmic noise and ebm blend together in an unique apocalyptic mix. Celebrating their 15th Anniversary, AMBASSADOR21 dance with wolves and introduce "Human Rage".
"Human Rage" is ten new tracks which will feed your mind and heart and will make you dance. Ten tracks as ten words which AMBASSADOR21 use to describe the present - terror, fear, bigotry, war, money, freedom, action, courage, love, friendship.
From the feeling of an incoming storm in the industrial mid-tempo main title "Human Rage" to the blast of aggression in high-speed hardcore beast "Fear Level Red". From the martial beats and provocative lyrics in Russian and English in "Revelation" to the deep wobble bass and wall of noise in "Metal". From the fighting beats in brutal "Cannibals" to the trap synths in dance floor killer "Scream Your Name". From the fast moving guitar tracks "Do Or Die Time" and "Empire Must Fall" to the dark, cinematic and noisy title "Before We Die". From the straight industrial hammer-beats to the explosion of noise and cold transparent ambience at the end in "Black Dot". It’s hard, it’s catchy, it’s honest. With this new album AMBASSADOR21 do what they do best - blast your brains.
What are the keywords that come in your mind when you listen to "Human Rage"? Terrorism, religion, attitude. "Human Rage" is mature work of adult people with a strong position, who aren’t afraid to draw conclusions and speak out loud on their behalf.
Devaluation of human life. Terrorism, which has become a part of everyday life. Human life as a small coin in the ideological, financial and religious wars. Those are the main motives of "Human Rage". This album is addressed to thinking, open-minded people, who are responsible for their own acts, who ask the right questions and are searching for the right answers; who aren’t afraid to live and are in love with life; who can't imagine life without music.
Did you notice how many times the word “life” was mentioned? Yes, “Human Rage” is a martial dance in the name of life.
Too late to be cool. It's do or die time. Now listen to "Human Rage".

2CD Deluxe Edition is strictly limited to 300 copies and include bonus disc with new remixes by NULLVEKTOR, HYDRONE, 13TH MONKEY and also tracks from "Killers" EP, "Time To Burn" EP and "We Are Legion" EP which weren't released on CD previously.